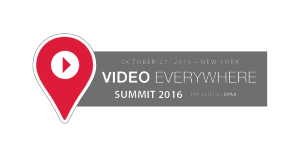 Brand Presenters Include B. Bonin Bough of Mondelez, John Costello of Dunkin’ Brands, Kimberly Gnatt of Coca-Cola; Chairs and CEOs from UM, Carat, GroupM and others

NEW YORK, August 2, 2016— The Digital Place Based Advertising Association (DPAA) announced today that an all-star lineup of brand and agency leaders and decision-makers have agreed to share their insights at the association’s 2016 Video Everywhere Summit. The annual event will be held October 27 at the iconic Roosevelt Hotel in New York as part of Digital Signage Week.

“We are riding a tremendous wave of momentum heading into this year’s Video Everywhere Summit,” Frey said. “The digital place-based media industry has firmly established itself as an effective video advertising option among agency and brand decision-makers, and the DPAA itself has been signing on new members at a record pace. There is recognition from all corners that in today’s advertising everywhere ecosystem our digitally empowered screens are delivering tremendous value without any of the other digital concerns of viewability, fraud or ad blocking.”

Brand executives on this year’s speaking roster include:

Also appearing will be digital place-based media star Cat Greenleaf, the host of “Talk Stoop” and a favorite of delegates at past Video Everywhere Summits.

Topics to be explored by these industry leaders include deployment of mobile and location data in conjunction with DPB screens, programmatic, the media economy, case studies, building lasting relationships with consumers, a technology innovation showcase, and more.

The Video Everywhere Summit will once again feature an experiential exhibit hall, The Intel Hall of Innovation, where DPB networks and technology companies will display the latest in digital place-based media content and tools to reach on-the-go consumers.

Showcase sponsorships have been selling at a pace far exceeding earlier years and are anticipated to be fully sold by the end of August.

The historic Roosevelt Hotel, known as “The Grande Dame of Madison Avenue,” is the official hotel of Digital Signage Week. Attendees to the Video Everywhere Summit or any other of the week’s events are eligible for preferred hotel rates. These rates and all Summit information can be accessed at www.videoeverywheresummit.com

The DPAA’s annual Video Everywhere Summit brings together 700+ delegates representing brands, agencies, digital place-based networks, ad tech, research firms and others for a full day of presentations, panels, case studies, networking events and experiential exhibits. The Summit is the only event dedicated to multi-screen viewing and video neutral planning. The 2016 Video Everywhere Summit will be held on October 27 in New York.

The DPAA is a Video Everywhere AssociationTM.