Event to be Featured on the MTA Network ‘ON THE GO’

NEW YORK, NY, September 28, 2016 – As part of the promotional effort to increase awareness of NEW YORK DIGITAL SIGNAGE WEEK (Oct 24 – 28) the MTA will be running a series of video spots on its ‘On the Go Network’ of digital screens throughout the city. The campaign will run from October 1 through 28 in support of the week.

“Through this innovative campaign with The On the Go Travel Station, we will reach thousands of our key demographic attendee base who ride the subway system in New York City,” said Russ Curry, Managing Director, Ministry of New Media, organizer of New York Digital Signage Week. “We are excited to be promoting this leading industry event for the digital signage industry by using the interactive digital communications tool that provides MTA New York City Transit subway customers with a wealth of valuable information at their finger-tips.” See image of campaign below. 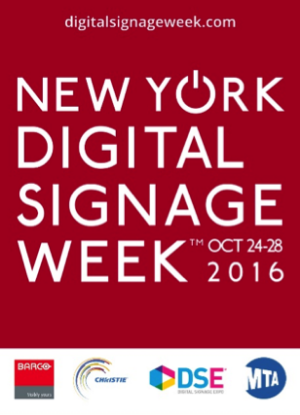 The On the Go network is made possible through a unique public-private partnership between the MTA and OUTFRONT Media and Intersection, with the investment being recouped through the sale of digital advertising displayed on the screens.   The interactive kiosks provide travel information and way-finding services to New York’s subway users. Deployed at more than 30 subway stations across the city, the network reaches over 1.5 million commuters per day.

NEW YORK DIGITAL SIGNAGE WEEK is a week-long series of events which attracts thousands of digital signage industry leaders and hundreds of out of home media owners, media planners, creative agencies, retailers, architects and investors, to gather in New York during the week of October 24-28, 2016.

The initiative, first put together in 2012 by the publisher and event organizer, the Ministry of New Media, will once again include dozens of concurrent events including The DailyDOOH Investor Conference, the NEC New York Partner Showcase, the Video Everywhere Summit Presented by DPAA and the SEGD Xlab Conference and tours as well as networking other receptions and parties throughout the week.

New York is a natural choice for the location of the week with its concentration of media owners, advertising agencies and a vast eco-system of designers and creative agencies; not to mention the most spectacular collection of digital billboards in the world to be found in Times Square.

The Global Digital Signage Market is valued at $11 Billion in 2016 and will continue to rise exponentially in the coming years. With the explosion of retail screen networks and the conversion of classic OOH sites to Digital Out Of Home create a myriad of new opportunities for media owners, agencies, advertisers and of course investors. For the most up to date information about New York Digital Signage Week and a registration link to each of the events, visit http://newyork2016.digitalsignageweek.com/